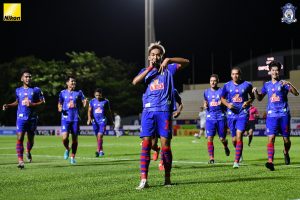 A slow burner of a match came to life in the second half as nine man Chiang Mai battled to hold off an increasingly frustrated Rayong side.

Relegated from League 1 last season Rayong have built their team around David Cueva, signed from Khon Kaen United, and two Brazilian imports; Ramon at centre back and Adalgiso up front. The latter goes by the name of Pitbull – presumably not the name his parents chose for him.

For Chiang Mai, Jaturong, Meedech, Somyot and Porncha were four familiar faces from last season. Kabaev and Danilo started up front with the pacey Tawan playing just behind the front two.

No fans were allowed at the game; supporters could only watch using an AIS sim card. Viewing required registration and receipt of an access code. Occasional loss of the feed and longer loss of the sound were both frustrating. As was watching the game on a 5 inch screen. The sooner we can get fans back into the stadium the better.

Chiang Mai opened the scoring after 12 minutes. Supasak battled away on the left; holding up the ball by the goal line and then finding a pass for Pongrawit on the corner of the penalty area; his first-time left-foot shot took a huge deflection off Suwat turning the ball wide to the left of the stranded Suppawat and into his bottom left corner. 1-0 Chiang Mai.

This was the only on target shot in a half that had plenty of effort but with limited threat from either side.

Kittikai failed to connect with a header from six yards for Rayong. And Pitbull headed Cueva’s long free kick over the crossbar. Cueva was lively – but Rayong appear overly dependent on his creativity. Pitbull was to prove more of a poodle in a quiet Thailand debut.

The second half was a much more frenetic affair and if this season’s home games have that much entertainment, then the fans will be well entertained.

Almost from the restart Chiang Mai could have doubled their lead. Veljko’s long free kick reached Danilo on the goal line; his chipped cross was flapped at by the ‘keeper and pushed out in front of goal. Tawan got to the ball first but could only slide it wide of the far post.

Tawan’s pace was a real threat and breaking forward he pulled the ball inside towards Danilo. Although the pass was intercepted by a defender the backpass was casually underhit leaving Danilo in a race with the keeper who just got his right foot to the ball before tumbling from the inevitable collision.

Chiang Mai’s pressure paid off in the 52nd minute with a goal that was so reminiscent of some of Ryo Matsumura’s efforts last season. Picking the ball up outside the left of the penalty area Kabaev shimmied (and he is a big lad to be doing that) inside onto his right foot and curled a twenty yard effort high into the far corner while getting a nasty kick from Rayong substitute Pongsakorn at the same time. It was a fine goal. 2-0 Chiang Mai.

Kabaev was unable to continue and was replaced by Pinyo.

The home side’s inexperience showed when they relaxed and two minutes later allowed Rayong back into the game. Kittikai got to the right goal line and lobbed his cross towards the back post. Meedech was ball watching and closer to his own goalkeeper than to the advancing Adisak who nodded home a simple header. 2-1.

To add to Meedech’s woes his second yellow card, and a sending off, came in the 59th minute with a late tackle on Pongsakorn. There was no argument. Cueva’s long distance free-kick was pushed wide by Jatuporn for a corner.

David Cueva was booked for a challenge on Somyot; Cueva’s challenge looked fair but the challenge from Suwat was much more rustic.

With ten men Chiang Mai still looked in control. Then in the 72nd minute Tawan was sent off for his second yellow card.

Down to nine men Chiang Mai moved to five across the back. Rayong dominated possession but still struggled to create good chances.

Pitbull took down a cross from Suwat but shot straight at Jatuporn from 12 yards. The Chiang Mai goalkeeper then made an acrobatic catch high to his right to keep out a looping header from Cueva.

Kittikai should have done better when played in behind the back line but blasted over the crossbar.

Supasak quickly atoned – breaking forward on a rare visit to the Rayong half and drawing a freekick after a foul by Pongsakorn. Pongrawit’s long range curler narrowly clearing the crossbar.

A last push from Rayong. Cueva’s long cross from the right looked like it was heading for a goal kick but was headed back across goal and Ayu, on as substitute, headed onto the crossbar from close range; the ball bouncing down onto the goal line and into Jaturong’s relieved grasp.
Pinyo broke down the left and was hacked down by Pongsil’s late challenge. A straight red from the busy referee reduced Rayong to ten men – the referee still had time to book Pitbull for a push.
Five minutes of injury time and the game ended with the calmly impressive Veljko still managing a late gallop down the pitch ending an impressive and organized debut.

Early days; but this was a resilient and organized effort that will give the squad and management a great deal of encouragement. There was plenty of pace and movement on the break and no shortage of confidence in this (mostly!) young team.