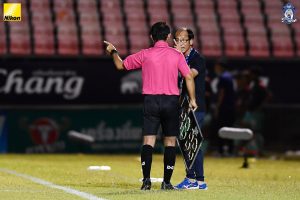 The last time Chiang Mai FC were in Sukhothai was two seasons ago in League 1 with a 2-1 win for the visitors and an outstanding debut from new goalkeeper Pairot. Happier times and wonderful away support.

How things have changed. Both sides are now in League 2. But only one of these clubs looks to have the ambition and talent to return to the top flight.

This was all too easy. Chiang Mai were poor and petulant. Sukhothai played some fluent football and were much the better side on a good playing surface.

Chiang Mai made three changes to the team that lost to Customs last weekend.

Coach Pairoj moved to a back four by adding Chutipan alongside Veljko – presumably to try, unsuccessfully, to halt the flow of goals at Sukhothai this season. But with Pinyo, Phosri and Somyot in midfield Chiang Mai looked lightweight. Kabaev was back to fight a lonely battle up front with Danilo and Tawan as near bystanders throughout the first half.

The game was played in front of 273 Sukhothai fans – no away supporters were allowed; for which, in hindsight, we should probably be grateful.

Chaiyapruek was booked in the 3rd minute. He had a game to forget.

Sukhothai opened the scoring in the 17th minute. Osman Sow laid the ball back to Chaowasit just outside the penalty area. He moved the ball to his right foot and his underwhelming low shot looked to be heading wide until Chaiyapruek stuck out a right foot and deflected the ball past Jaturong into the middle of the goal.

Sukhothai’s baby-face goalkeeper saw his first action a few minutes later stretching to punch rather unconvincingly off the head of Kabaev.

Sukhothai were dominating possession at this stage and offered width through Piyarat on the left and Steinbauer down the right. Steinbauer beat the out-of-sorts Chaiyapruek far too easily dragging back his cross for Chaosawit to blast over the bar from six yards when he had space for a more composed finish.
Just after the half hour Sukhothai were awarded their first of two penalties. Again the build up was down the right and Meedech and Sow wrestled for Steinbauer’s cross. The referee saw Meedech’s left arm around the falling Sow. In the protests Meedech was booked.

But you reap what you sow (sorry!) and Sow’s penalty was awful. Blasted hopelessly over the crossbar. It was not even close. Meedech’s celebrations added some extra spice.

Danilo’s challenge on the Sukhothai goalkeeper looked high and unnecessary given that the forward was clearly offside as he ran onto a ball played into the area by Saharat Phosri.

Chutipan was booked for a kick. This was to prove costly in the second half.

In the 42nd minute Sow’s clever header for Velez running behind a static Veljko saw the Argentinian forward’s volley bounce off the top of the crossbar.

Half time and the surprise was that Chiang Mai were just a goal down and still in the game.

The second half opened with Chiang Mai looking a little quicker to press; a little more urgent. Saharath was booked for a foul on Kabaev.

But the early optimism was short lived. Was there a whistle for a foul by Phosri on Chaowasit as Sukhothai broke forward? If there was then the referee was insistent that play should continue. The ball reaching Velez in space outside the penalty area. As he moved to Chutipan’s left there was only one likely outcome. Chutipan’s left leg bringing the forward down. Not dangerous. But badly lacking in subtlety. Chutipan’s second yellow card meant that he was off.

But Chutipan does have anger issues; we have seen this before. He does not willingly leave the football pitch.

Veljko looked ready for a fight. Chutipan was taking on the fourth official. And Meedech was far from a calming influence. The officials had lost control. Too many people were pushing the referee – it is not a good look for the League or for Chiang Mai FC. We may not have heard the last of this incident.

It took almost six minutes from the initial foul to the eventual, and wasted, freekick. Which makes little sense of the four minutes added time at the end of the game.

With Chutipan off Chiang Mai simply moved to a back three. But Sukhothai took quick advantage of both the extra man and an aggrieved Chiang Mai side. Piyarat broke down the left, beating the distracted Veljko with ease and crossing to the far post where Velez had the simplest of headers for 2-0.

Suddenly it was 2-1. And it was the goal of the game. Somyot won the ball in midfield and slid the ball forward to Danilo outside the left corner of the Sukhothai penalty area. With Saharath and Do Yeon backing away, Danilo dragged the ball onto his right foot and hit a superb curling 20 yard shot into the keeper’s top left corner.

While AIS were still showing Danilo’s goal on repeat Sukhothai kicked off – drove the ball into the right side of the penalty area where Jaturong rushed out and upended Chaowasit. It was clumsy and unnecessary though Chaowasit appeared to be inviting the challenge rather than playing the ball. The referee awarded the penalty. Chiang Mai’s protests were muted. Sow rolled the ball to Jaturong’s left side for 3-1.

As the rainstorms came Sukhothai added a fourth through Woo Geun Jeong, once of Chiang Mai United. Set up once again by Sow, who chested the ball down for Velez on the edge of the penalty area. Velez shaped to shoot; saw the pass to Geun Jeong who sidefooted past Jaturong and inside the far post.

There was still time for Pongrawit, on the pitch for just six minutes, to be booked for a poor hack at Geun Jeong and for Natithorn, making his debut as substitute, to also be booked. It was not his first offence in a brief and forgettable debut.

There were just four minutes of added time; I suspect no one really wanted more than that.

There will be no shortage of aggrieved anger amongst the Chiang Mai squad – mostly directed at the referee. But with only one decent goal attempt all game that anger might be better re-directed to focusing on the improvements necessary for next week’s home game with Ayutthaya.