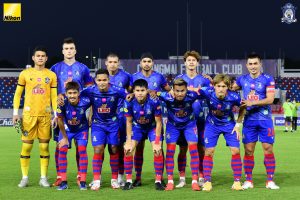 A well won three points takes Chiang Mai to joint 10th in T2 alongside Kasetsart and fast-improving Muangkan. Eight points clear of the three clubs in the relegation zone and seven points short of the play-off places.

Thanks to the end of season playoffs for the third promotion spot there is still plenty of opportunity for change in the top six in the second half of the season.

They looked like a team short on confidence; typical was Smith failing to shoot when clear in the second half preferring to pass square instead. Their leading goalscorer, Rodrigo Maranhao, has not started in the last two games. It was hard to see where their next goal will come from.

Chiang Mai’s defending was solid throughout. There was a welcome return for Veljko; although a recurrence of his back pain saw him substituted late in the second half. Narupon was immaculate throughout. An early headed deflection of a powerful free kick from S. Adisorn was important.

From the resulting corner Fahas had to punch clear from under his crossbar and then made a confident catch from the follow-up corner.

Up front for Chiang Mai Tawan was a live-wire; enjoying space and the opportunity to run at defenders. His right footed curler from 25 yards was pushed over the cross bar by Nantapol.

Taku Ito was Phrae’s main threat – his long run down the left in the 25th minute ending with a disappointing cross easily gathered by Fahas, while Smith and Phitchanon waited in the penalty area.

Danilo launched himself into a bicycle kick to reach Meedech’s low first-time cross from the right side. The connection was good; the height and direction less so.

Pongrawit’s run at the middle of the Phrae defense ended with his shot being deflected for a corner while Fahas did well to win a challenge with Yuthajak to punch away Sarawut’s cross.

0-0 at half time with little to choose between the teams. Chiang Mai had looked a little too narrow moving forward. Meedech’s forays down the right wing were limited. Meanwhile Phrae made more use of Taku and Sarawut playing wide although the final cross was rarely threatening.

A change of wings at the start of the second half saw Taku move to the right side and his strong run to the goal line ended with a pass inches behind substitute Kittisak’s run so he could only deflect the ball wide.

In the 72nd minute Chiang Mai took the lead with a simple effective counter attack. Narupon’ s clearing header was headed forward by Phosri into the run of Tawan who, moving at pace, held off Carlos Santos and confidently side-footed the ball home passed the advancing keeper. Cue his athletic celebration.

Trying to get back into the game Sarawut blasted powerfully over the crossbar; he then ran onto a tidy reverse pass from Taku and from a narrow angle drew a smart near post save from Fahas. Taku then headed over from S. Adisorn’s cross.

As Phrae pushed forward Tawan had a chance for a double; surging forward from halfway only to pull a left-foot shot narrowly wide.

It was a case of fine margins again; Chiang Mai took one of their chances; Phrae did not. And the home side were good value for their narrow win.

The second half of the season starts on the weekend of 8/9 January. Until then teams will acquire, retain or release players depending on their ambitions for the rest of the season.

In the meantime Merry Christmas and a Happy New Year to you all. 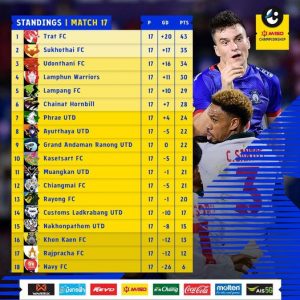 League table at half way point.