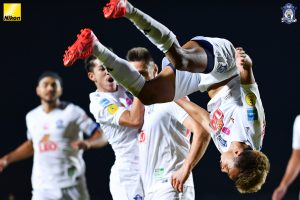 After last week’s defeat at Lamphun a determined Udon Thani FC eased past Chiang Mai on Sunday evening to remain in third place, a single point behind Sukhothai, at the mid- point of the season.

For Udon Thani, Thales was passed fit to play after a week without training. His thirteenth goal of the season showed his importance to Udon’s success.

Chiang Mai were playing their 7th game in 22 days; a period that has required them to travel to Lampang, Trat, Satthahip, Chiang Mai, Kanchanaburi, and Udon Thani. The BG bus has been clocking up the mileage.

Unsurprisingly, given the schedule, there were five changes from the midweek game at Muangkan. Significantly, Veljko Filipovic missed out with a back injury.

Udon Thani, who did the double over Chiang Mai last season, have moved from the Sports Institute to the three year old SAT stadium to the east of the city. For a new stadium the pitch is a poor, bumpy surface.

On a cold (cool?) night, Udon Thani looked like Christmas tangerines in their bright orange; and Chiang Mai added a snowy touch in their all white; all under the excellent floodlighting.

The opening minutes were quiet; though an injury to Settawut required an early Udon Thani replacement.

Pongrawit woke the supporters up with an outrageous 50 yard shot from the left side touchline which nearly caught out Sornnarai as he back-peddled to turn the ball over his crossbar.

At the other end Prakit’s wobbling 30 yard effort brought Fahas into action.

Chiang Mai opened the scoring in the 26th minute. Seiya’s pass into the left channel was weighted perfectly for Kabaev’s run; the Chiang Mai forward held off a tame challenge from Kapisoda; confronted by the goalkeeper Kabaev passed the ball square for Tawan to tidily finish. Cue his cartwheel and flip celebration.

It came, as did most of Udon Thani’s best attacks, down the right flank.

Then, Kittipong’s cross from the same side was met by a miscued volley from Prakit drawing an uncomfortable save from Fahas.
The tempo of the game was increasing as were noise levels. A lovely reverse pass from Lim set up Thales, in space, running into the penalty area away from four defenders. Kiadtisak was ball-watching allowing Thales to make his diagonal run and finish with a classy flick of his right boot to send the ball past Fahas from six yards.

Thales’ celebrated with a copy of the Tawan cartwheel and flip. Impressive, although the landing was a bit heavy.

Lim was very good all evening – dominating the middle of the park and launching attacks with precision passes to both touchlines.

1-1 at half time. Thales limped out for the start of the second half. Even a half fit Thales is a handful.

Udon Thani took the lead in the 52nd minute when Prakit’s free kick was headed home by  a stooping Kapisoda as the Chiang Mai defense looked distracted by the antics of Thales. Kapisoda got goalside of Seiya; his header from six yards lacked power but bounced down and, almost in slow motion, lobbed up and beyond Fahas. The reaction of some of the Chiang Mai players suggested that the goalkeeper might have done better.

Udon Thani were dominant at this stage. Their third goal came minutes later. Arnold Suew breaking down the left wing; passing Chutipan too easily and sending over a hard low cross aimed at Thales at the far post. Fahas and Chaiyapruek both stretched to intercept. Chaiyapruek was first to the ball and turned it past his own goalkeeper. 3-1 Udon Thani.

One good chance came for Chiang Mai after 70 inutes when Kabaev beat Jetjinn on the edge of the Udon Thani penalty area; his shot was well saved low to bis left by Sornnarai.

A series of substitutions followed. Some half chances at both ends. But it felt like the game was over. Udon Thani sat back; Chiang Mai were spent and a weary Kabaev was replaced by Suchanon.

That weariness will not be helped by a 12 hour overnight bus ride back to Chiang Mai.

The question for both teams is what happens between now and the January restart. Can Udon Thani keep Thales? If so they will continue to push Sukhothai for the second automatic promotion position.

As for Chiang Mai; does BG have the resources to keep both struggling Rajpracha and Chiang Mai in League 2? Changes are both likely and necessary. 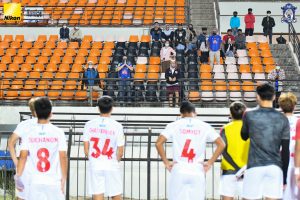 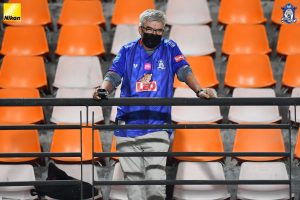