Time Out asked what shall we call the new tower?

Well Burj Dubai is still available after the 2010 renaming of what became the Burj Khalifa. 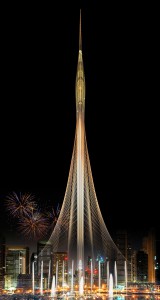 The tower’s height and name has not yet been revealed, but the developer said it would “comparable in greatness and in height” to the Burj Khalifa and the Eiffel Tower in Paris.

The building has been designed by Santiago Calatrava Valls, a Spanish/Swiss architect, who has worked on the World Trade Centre Transportation Hub in New York, the Spire Tower in Chicago and the Olympic Sports Complex in Athens.

The tower will be “directly linked to the central island district of Dubai Creek Harbour with a vibrant 4.5km creek boardwalk offering an array of retail, dining, leisure and entertainment choices”, Emaar said in a statement released on Saturday.

Does that sounds a bit too much like the pr work for the new canal being built through decimated Safa Park?

It looks pretty – but in other news 50% of Dubai developments due to complete in 2015 failed to do so and have been delayed. The DWC airfield is way behind schedule. Maybe it is time to get some things finished before building the next destination/vanity tower?