Home→asia→Voting no to the junta’s constitution 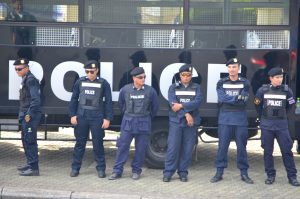 Pavin Chachavalpongpun’s analysis of the 7 August 2016 constitutional referendum is sound.

The military government has pulled out every trick to encourage a yes vote. At the same time it has done all it can to silence any no vote campaigning, especially in the north; the heartlands of Puea Thai.

The junta desperately wants a yes vote. They will argue that a yes vote legitimises their 2014 coup and everything that has happened since.

The junta has also been deliberately vague about what happens in the event of a no vote on the 7th.

Whatever the vote; the military will still be in charge. And that is the trouble with the referendum. A yes vote legitimises military rule under a constitution for many years to come. A no vote leaves the military in charge; and they can play the game of drafting another constitution; and taking as long as they wish to do it.

Here is Pavin’s oped in the Japan Times.

Thais are being encouraged to cast their vote in an Aug. 7 referendum that could approve a new constitution and therefore legitimize the military government. The referendum is the first step, which requires public participation after more than two years of military rule. In 2014, the army staged a coup overthrowing the elected government of Prime Minister Yingluck Shinawatra, and vowed to make Thailand more democratic and corruption-free.

The military then laid out the so-called road map to democracy and appointed cronies to draft the constitution. The outcome is similar to the one witnessed in Myanmar, with the Tatmadaw, or the Myanmar Armed Forces, taking charge of political reforms with an attempt to preserve a degree of political power for itself. Today, the Tatmadaw holds up to 25 percent of the parliamentary seats. In the Thai case, representatives of the army will sit in the Senate, which will serve as an instrument of the old power, to counterbalance future civilian governments.

The referendum is crucial for the survival of the military regime under the premiership of Gen. Prayuth Chan-ocha. If approved, the constitution will add a layer of legitimacy on the coup makers. More importantly, it will give a green light to future steps taken by the junta to complete the road map. This explains why the government is compelled to ensure a positive outcome of the referendum.

Achieving the kind of outcome the military wants won’t be easy. The current draft of the constitution has been criticized as undemocratic and designed to protect the political interests of the military and its allies. For example, it empowers key institutions, including the Constitutional Court and the National Anti-Corruption Commission, to challenge elected governments. In 2008, the Constitutional Court was responsible for removing two elected governments backed by former Prime Minister Thaksin Shinawatra, who was perceived as a threat to the traditional elites.

The constitution will also allow independent candidates to run in the next elections. More autonomous parliamentary members would help break the domination of the Lower House by powerful political parties like that of Thaksin. Therefore, it is likely that future governments would be politically vulnerable, wobbly coalitions, leaving them susceptible to manipulation by the traditional elites. On top of this, as indicated in the new constitution, prime ministers would not need to be elected politicians. This would pave the way for old generals to reach the premiership through a non-elective channel.

If the constitution is rejected, it will raise serious questions about the legitimacy of the military government. Pro-democracy activists and academics have called for the resignation of Prayuth should the constitution be disapproved and the junta should open up of the constitutional drafting process for public involvement. So far, Prayuth has shown determination to stay in power no matter what.

The referendum comes at a critical period in Thai politics. Already, one of the Constitutional Drafting Committee members, Norachit Singhaseni, replied to a foreign journalist who asked about the passing of King Bhumibol Adulyadej that “Thais would spend at least a year in mourning.” Although he said nothing about the referendum being postponed, in reality his death would virtually put all activities in Thailand on hold.

Bhumibol has been sick and in and out of the hospital since 2009. The approaching end of the Bhumibol era was primarily responsible for the coup of 2014. Military elites were anxious about Thailand’s future without the charismatic king, and for them the coup was a response to this anxiety.

The military elites have since striven to maintain their political interests by working closely with other allies in the monarchy network. Because Bhumibol has for many decades remained at the top of the political structure in Thailand, his departure will leave a gigantic vacuum that could bring instability to those in the network. The hope for the heir apparent to gain the same reverence and respect from the public is dim. It is widely assumed that the crown prince will be a less able monarch than his father.

A series of photos released last week by the German tabloid Bild showing Crown Prince Vajiralongkorn at the Munich Airport, clad in a tank top half-shirt barely covering massive yakuza-style tattoo stickers, shocked the Thai public, particularly the royalists. The anxiety they felt prior to the 2014 coup could be reinforced by the recent episode in Germany; they might fear that the new reign could end in disaster. Therefore, with the unpredictability of the next reign, the military has sought to transfer the royal prerogatives, strengthened by Bhumibol, to the judiciary. The military is assigning the judicial institution a role of the ultimate arbitrator in politics.

The transfer of power in this way is largely known as the making of the “deep state.” It transforms the judiciary into a supreme institution that can intervene in politics when deemed necessary, as the king has occasionally done in the past. Defending this constitution means, in part, empowering the legal hands to redefine Thai politics for the benefit of the elites. For the military, the referendum is a matter of great importance.

The future of Thailand is not bright. The military will need to revise the constitution for a third time if it is not approved in the referendum. But the process will prolong the existence of the junta despite intensifying pressure both domestically and internationally. Worse, if it is accepted, Thai democratization will be delayed. The military’s footprints are seen clearly in the constitution. And with an unproven new king on the throne, the military will not want to withdraw itself too quickly from politics.