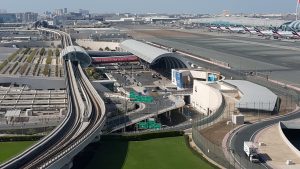 Back on 24th December 2016 I wrote an article titled “United Emirates.” Now the German business newspaper, Handelsblatt, has taken up the theme of merging Emirates and etihad into a single airlines.

Sir Tim Clark, President of Emirates, has subsequently said that there have been no merger discussions. But no smoke without fire is usually true.

So here is the Handelsblatt story:

The ruling familes of the United Arab Emirates, which control the Emirates and Etihad airlines, have held talks about possibly merging the two airlines, Handelsblatt has learnt from several sources.

The Gulf carriers are experiencing turbulent times after years of growth and expansion: both are struggling with falling profits and a changing industry. Combining them would not be easy, but is now being considered as an option. The possibility of consolidating the two state-owned carriers would require a huge amount of effort but is not out of the question anymore.

Etihad has in the past said it is not even considering scenarios that would include a closer association, or even merger, with Emirates. The airline said that there are currently no talks between the two companies, while Emirates did not respond to a request for comment by Handelsblatt.

But there is change in the air. The Gulf states have three big airlines: Emirates, Etihad and Qatar Airways. All three have experienced substantial growth since their inception, despite operating in a region with a small number of homegrown passengers. The UAE has a total population of about nine million: the same as London.

This small population had not impacted the airlines for several years. But times are changing. Emirates announced a 75 percent fall in half year profits in November. Etihad meanwhile announced at the end of last year that it would evaluate its global strategy as it continues to battle with persistent losses from its stakes in German airline Air Berlin and Italian flagcarrier Alitalia.

“Etihad has to realize that its strategy of gaining quick access to the European market by way of investments did not work.”
Gerald Wissel, analyst, Airborne Consulting
The Gulf-based airlines are reaching their limits and must change their operations to stay competitive. Lufthansa and Etihad last month agreed to a code-sharing partnership on flights from Frankfurt to Rio de Janeiro and Bogota.

Lufthansa boss Christian Spohr said last month in Abu Dhabi that he expected more rationalization among the Gulf Airlines, but did not specify what he meant.

Etihad and Emirates have a lot of overlap. Their respective hubs in Abu Dhabi and Dubai are only 140 kilometers apart, for example.

“Economically and strategically, a cooperation, or maybe even merger, between Etihad and Emirates would without a doubt make sense,” said Gerald Wissel of Hamburg-based aviation consulting agency Airborne Consulting. “But a lot of national sensitivities would have to be overcome. It’s not a simple topic.”

To understand those sensitivities, you have to look at the region’s history. At the beginning of the 1970s, there was only one airline operating in the region: Gulf Air. The airline was a joint venture between Bahrain, Qatar, Abu Dhabi and Oman. In 1985, Dubai’s leaders decided to launch their own airline, Emirates. The new airline quickly grew and soon neighboring states started to create their state-owned carriers. Qatar withdrew from Gulf Air in 1993 and created Qatar Airways. At the same time Oman decided to focus on its own airline, Oman Air. Abu Dhabi entered the scene in 2003 by launching Etihad.

Trying to get back together after a breakup like this could be a tough undertaking for the ruling sheikhs of Abu Dhabi and Dubai. A potential cooperation is an especially delicate subject in Dubai. Abu Dhabi, unlike Dubai, has oil. The emirate could use this natural resource to exert pressure on its neighbor and possibly force cooperation on them.

Another hurdle is the different business models of the airlines. Emirates has no outside investors and counts on large-scale aircrafts such as the Airbus A380, which it uses on long-haul flights from and to its main hub in Dubai. Etihad on the other hand bets on investments in smaller airlines like Air Berlin.

“In particular Etihad has to realize that its strategy of gaining quick access to the European market by way of investments did not work,” Mr. Wissel said.

Abu Dhabi’s ruling family made it clear at the end of February that they were concerned about Etihad. H.E. Mohamed Mubarak Fadhel Al Mazrouei, chairman of the Etihad Aviation Group, put out a statement saying: “We have to ensure that our airline has the right size and the right business model.”

Its investments in Air Berlin and Alitalia in particular have turned into a headache. The recent decision to split Air Berlin into three pieces is expected to save the airline, which is €1 billion in debt. Air Berlin sold several of its planes to Lufthansa, which will use them at its lowcost subsidiary Eurowings. Air Berlin’s Austrian subsidiary Niki will form a joint venture with TUIfly, while Air Berlin itself will focus its business on long-haul routes from its hubs in Dusseldorf and Berlin. The complex restructuring has given Air Berlin some breathing space but the future of the company is still uncertain.

Alitalia’s future is equally up in the air. The airline will run out of money next month because it has been losing money for years. Etihad holds a 49 percent stake in Alitalia. Other investors include financial institutions Unicredit, with 12 percent, and Intesa Sanpaolo at 20 percent. A strategic plan to save the airline will be presented by March 12. If it fails, it could mean the end of Alitalia.

Meanwhile, not all airlines in the Gulf region are struggling. Qatar Airways continues to build on its airline empire together with its European partner IAG. But Emirates and Etihad are clearly struggling and a cooperation would be the most logical answer to their problems. But whether the ruling families in Dubai and Abu Dhabi can put aside their differences for the good of their airlines remains to be seen.