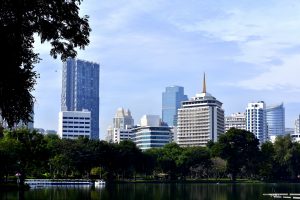 BK magazine is reporting that Bangkok may be about to witness the demise of the old Dusit Thani hotel at the junction of Silom Road and Rama IV..

Dusit Thani, the hotel and property-development company, announced last week that it has signed an agreement with the Crown Property Bureau to continue leasing a plot of land at the intersection of Silom and Rama 4 roads. The lease will be extended by 30 years with the right to extend for another 30 years, according to a press release issued yesterday.

The real news, however, is that under the extended lease agreement, which covers an additional plot of almost 24 rai, the Dusit Thani will partner with Central Group to create a “mixed-use” real estate development worth B36.7 billion (about US$1.05 billion).

According to Chanin Donavanik, vice chairman of Dusit Thani, the new development will feature a hotel, residences, retail areas and office spaces, as well as a large green space.

The implication is that the nearly 50 year old existing hotel could be at genuine risk.

That would be a genuine shame. Unfortunately Bangkok’s track record for conserving it’s landmarks is not very encouraging.

Built in 1970, the Dusit Thani represents a charming blend of vernacular (gilded mosaics, pointed arches) and mid-century modern architecture. Since the Siam Intercontinental was razed to make way for Siam Paragon, the Dusit has become one of the last remaining hotels of the sort.

The hotel is also the home to the Doug Hood school of golf which is perched on the rooftop.