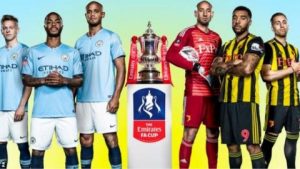 So Watford went to Wembley. Our first FA Cup Final since 1984. And yes I was there 35 years ago.

This year I am happy to report that I was in the USA or Alex’s graduation – and oddly not one USA tv network was showing the game. This at least saved me from having to watch a 0-6 demolition of my team by Manchester City.

The highlights – if they can be called that – are here:

Pereyra had an early chance to give watford the lead – but Ederson was out of his goal quickly to make the block. When Cit opened the scoring after 25 minutes there was only one team in the match.

The Watford support was wonderful – cheering and flag waving until the end. But the reality is that this was a non-match. An embarrassment even, In this form City would have beaten anyone. But other teams might at least have made it a contest.

But City’s domination of domestic English football has been bought. The club is currently being investigated for alleged rule breaches by Fifa, Uefa, the Premier League and the FA.

City’s success is not an inspirational sports story. It is a club owned by a repressive foreign government that seeks to burnish its image through sports investment and ownership. Manchester City is almost a distraction – a part of how autocrats maintain their authority.

City’s resources are disproportionate to the majority of the Premiership as they have proven every time these two teams have met since Watford’s 2015 promotion. This was the English champions’ ninth win out of nine in this fixture in that time, by an aggregate score of 31-4, making it almost indistinguishable from any other victories.

After all the pre-match hype from Watford and talk of this being our time – all we ended up with was a certain amount of public sympathy. England’s showpiece Cup Final was a parade – a training ground exercise. City hardly broke sweat.

How Watford recover from this will be interesting. I suspect that for some of the team this was their last Watford appearance. A new season is a new beginning. But there may be a long hangover after this history book, and all too public, drubbing.

Money funs football now – and Manchester City have an apparently unlimited amount of it. The cost is football as a competitive spectacle.