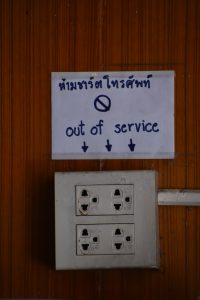 Other than agriculture the real driver of Chiang Mai’s economy is tourism – this fuels jobs at the airport, transport, hotels, restaurants, malls, construction etc.

But Chiang Mai’s economy faces duel threats – a water drought that may just be saved by late rains and a tourist drought; mainly due to falling numbers of Chinese tourists, on whom, frankly, the city had become both dependent and dismissive

Hoteliers in Chiang Mai are saying that tourism in the north of Thailand is now in its worst place in ten years.

Booking for the next few months are 40% down on last year as Chinese and Middle Eastern customers either stay home or look beyond Thailand.

As a partial solution the Tourism Authority of Thailand has created a “Green Card” for the Green season that gives discounts; this is targeted at increasing Thai tourist numbers.

Thai media reported La-iat Bungsrithong of the Northern Thai Hoteliers Association as saying sme 30% less Chinese visitors are coming to Chiang Mai adding that rooms are being offered at 30-40% less than normal.

Hoteliers all over Thailand have been saying that the situation is dire in recent weeks.

It is not just Chiang Mai that is impacted – with stories of doom and gloom about tourism woes in Pattaya and Phuket.

Of course the woes are largely self inflicted but the Thai tourism authorities will be the last to admit to a problem; capsized ferries; smog; road crashes; police fees for not wearing a helmet or carrying a licence on tourist scooters; the far too strong baht; and an attitude that really does not welcome chinese tourists who are the lifeblood of the local holiday industry.

Which appears to be exactly what is happening. It can be fixed but only with “attitude adjustment.”