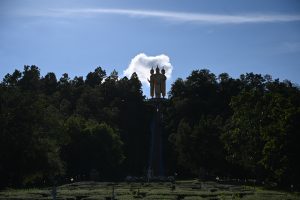 “Maybe one of the lessons of 2020 is how to make the world a better place for future generations. Less greed and more care. It sounds like an optimist’s utopia; but after 2020 we need to believe that we can do better.”

In hindsight I was far too optimistic.

2021 was a wasted year. Internationally, collectively and for many people individually. Even for those people who did great things, eg Tokyo Olympians (held in 2021 but called Tokyo 2020) no one was watching and I doubt many will remember. We all had other issues to deal with.

Our leaders flew in and out of Glasgow on private jets for a meeting on climate change. I doubt they even saw the irony.

Joe Biden became President – that felt like a good thing; but it was only an indication of how low the bar was set.

The storming of Congress was a dangerous symbol of the threat to democracy in an increasingly angry world. Trump 2024? Too many people feel that they have nothing to lose and that mainstream media, business and institutions have failed them.

In the November 2022 mid-term elections the Democrats may see their slim control over the House and Senate taken away. Constitutional checks and balances that do so much to make US style democracy unworkable.

A divided Senate and a Republican supreme court leaves Biden governing in handcuffs.

One result of 2021- autocrats and dictators have been emboldened. In too many countries ruling parties have used international community distraction over Covid19 as an opportunity to crack down hard against dissident voices.

Chin has led the way but closely followed by much of South East Asia.

China completed the annexation of Hong Kong; muzzled a once vibrant press and imprisoned anyone who publicly objected.

But China was far from alone in using the distractions of Covid to mask an authoritarian crackdown on opposition and dissenting voices.

Worst in South East Asia was Myanmar where the generals seized power in a 1 February coup. Under Senior Gen. Min Aung Hlaing, the military has resumed the position of power it held for decades, and outsiders, including China, are betting on it consolidating its control. It has cracked down on a robust anti-coup protest movement with extreme violence. Sanctions make no difference other than hurting the poorest citizens.

Russia rattled its sabres…again. What happens next for Ukraine?

Biden’s retreat from Afghanistan was a murderous shambles leaving the nation in the hands of the Taliban. There was no plan when the west went into Afghanistan and there was no exit plan.

Geopolitically the West, as led by the USA, simply looked weak – commitments made have not be honoured and trust in the long term damaged.

For China, the Western model of democracy is in terminal decline – which makes it remarkable how many Chinese still head to the USA to study there.

Angella Merkel retired after 16 years as German Chancellor. In many ways an extraordinary leader and a stabilising force not just for Germany but for Europe.

Even better we really know so little about her. She was calm, private, logical and very smart. The complete antithesis of so many UK politicians.

The UK is one year into Brexit. Another shambles. More promises unfulfilled.

And of course looming over the whole year – Covid – whether is was a third or fourth wave does not really matter. It has not gone away. The only good news is that many people are now vaccinated – which should at least mean a significant reduction in serious illnesses and hospitalizations.

Few things have ever been this divisive. Politicians on one side and too often scientists on the other.

Perhaps one of the lessons of the year is that we have at last moved on from the influence and impact of the second world war. Alliances and geopolitical divides that were drawn up in the post war years are being recast. Long overdue.

England were obliterated in the Ashes; now 3-0 down in a five match series after capitulating in Melbourne.

Personally – ennui is the biggest problem.

It is almost two years since we came back from the UK – our last international trip.

My mother died in May. The various UK and Thailand quarantine rules meant I could not attend the funeral or see her before she died. So many families have been in a similar situation but that does not make it right.

And I have spent most of this year on my own while Tai has worked a full year in Bangkok. I try to not let it get me down…but not very successfully. New Year’s Eve saw me home alone.

I do not mind that much – the thought of being in a crowd of people is still not appealing.

I go to sleep – but there are times when I think it may not matter whether I wake up. I know that it should matter. After all who would read my website! If anyone still does.

I wake up every morning feeling tired – with something aching. Knee, leg, head, elbow; there is usually something.

It has been that kind of year. Doing nothing and going nowhere is exhausting.

Oddly it has been my football trips that keep me going – that give me something to plan and places to explore. So when games were played behind closed doors I was miserable.

When travel was allowed within Thailand we did get to Phuket for a few days in February. It was so quiet.

Football took me to Nongbua, Uthai Thani, Sisaket, Udon Thani, Khon Kaen, Kanchanaburi and Satthahip/Pattaya. Mostly by car – there are some long drives but it is a good way to explore and see the country.

It can be a rather solitary trip – you quickly find out that few people speak English; conversations are difficult. Of course I could learn more Thai.

There are times when I do feel like I am alone in a foreign land….albeit a land that I know well.

I need to look after my health – it is too easy to sink into a regime of lethargy without enough exercise. But then I am not thirty-something anymore!

Two years of living with Covid – two years where our lives have been in upheaval – rules, regulations, restrictions. Some 5 and 1/2 million deaths. New ways of schooling; new ways or working; some businesses decimated; others prospering; two years of becoming angrier with eachother; two years of polarised opinions; two years of intolerance; two years of increased rather than reduced hostilities; two years of putting self-interest before the good of others. We are more selfish and more insular; more fearful and more protective.

Yes those are generalisations; many people have done great things; but have done so despite, not because of the geo-political environment.

Two years of losing family and friends that we cannot say goodbye to.