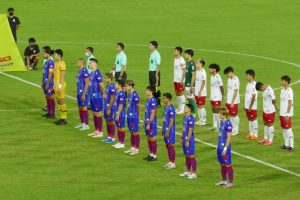 It was a glorious evening for football. A good pitch. A cool still evening. A smattering of fans lost in this huge bowl of a stadium.

It is just a shame that so very little football was actually played. This was a game almost devoid of anything that resembles quality; a litany of poor passing, poor challenges and poor decision making.

Chiang Mai gave debuts to two BG loan players; Kiadtiphon in goal and Sarawin on the right side of midfield. Missing from the matchday squad were Meedech, Pongrawit, Kabaev and the newly recruited Patrik Gustavsson.

Gisung Yeon and Choe Hoju are their newly recruited Koreans from Ranong and Customs respectively. Neither impressed.

That Porncha led the line says much about Rajpracha’s ambition. He scored just one goal for Chiang Mai in the first half of the season; ironically against Rajpracha.

The early chances fell to Rajpracha. Kiatiphon diving to his left to shovel away a ball that Porncha, rather than heading, stumbled into and kneed goalwards after a low cross from the right wing.

Thammayut’s free kick from the narrowest of angles was kept out by a combination of goalkeeper hands and the near upright.

Narapon was then caught in possession on the half way line by Porncha. Narupon holding back the Rajpracha forward received a yellow card; the referee presumably thinking that Veljko and Chaiyapruek provided cover.

Chiang Mai’s first threat came after 23 minutes; Supasak’s cross from the left was behind the back four and ideal for Tawan’s well-timed run. One touch with his right foot to bring the ball under control before hooking the ball wide of the near post with his left foot.

Another diagonal Veljko cross was met by Seiya with a weighted lay-off for Tawan. Tawan elected to go for goal rather than pull the ball square for Seiya. His left foot shot from a tight angle was a comfortable save.

0-0 at half time; but if the first half was short on incident the second half was about to reach a new low.

Chiang Mai’s best chance of the match came after 58 minutes; breaking forwards quickly and in numbers, Sarawin’s cross from the left wing was pulled square for Seiya just inside the penalty area; his first time shot was well hit; and well saved low to his left by Kittituch.

Tawan was booked for kicking Athibordee. Later Athibordee was booked for a reckless challenge to make sure substitute Amornthep could not go past him. Chiang Mai coach Bae also went into the book for venturing onto the pitch to protest Athibordee’s challenge.

Danilo looked very unhappy to be substituted and as he left so did any expectation that Chiang Mai might be looking for a winning goal.

Two last chances for Rajpracha; the substitute Jardel meeting Thammayut’s corner but heading too close to the Chiang Mai goalkeeper. And an Athibordee free kick from distance clearing the cross bar.

Final score 0-0. A result that may please the BG boardroom but which will leave anyone who watched the game deeply frustrated. It was poor. Despite the large number of new players Rajpracha still look like a relegation team.

As for Chiang Mai; goals are going to be rare. Kiadtiphon made an assured debut in goal. But there was little else to get the pulse racing – or even just ticking over.

Officially the crowd was 756. It was not.