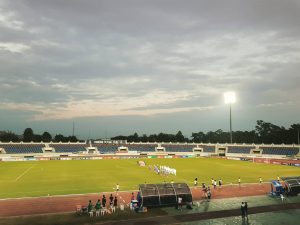 Just as the thoughts of the, allegedly 714 strong, crowd were turning to extra time, rather than dinner, Chonburi’s Korean striker, Yoo Byung-Soo, created some space on the edge of the penalty area and scorched a left foot shot past Jaturong, returning in goal for Chiang Mai.

It was no more than Chonburi deserved for dominating the second half and the visitors held on with some ease for the last ten minutes.

The Revo League Cup cleverly brings in the T1 sides for the round of 32 but insists that they all have to play their opening match away from home. This leads to some intriguing games with the real potential
for an upset. Just as one example Uthai Thani T3 knocked out SCG Muangthong this evening. Uthai Thani will be one of three T3 side in the last 16. Only Chainat survive from T2.

The visit of Nongbua Pitchaya to NakhonSi United may be the longest away trip in Thai football this season at 1,300kms each way.

The home team made eight changes from the side that drew with Rajpracha on Sunday. The issue with the starting eleven is that it was hard to see where any goal might come from.

Apologies to anyone who bought a number 26 shirt with the name of club captain Meedech on the back. He is now known as Poomphat and his shirt has changed accordingly. For some of us he will always be Meedech the Warrior.

Jaturong returned in goal for his first start since suffering a head injury against Chainat in October. He did well.

The back three of Meedech/Poonphat, Veljko and Watcharin had a sound game. My personal preference is to see Veljko in the centre of a back three rather than on the right. From the centre his strength and organization are more apparent.

Chonburi, who are currently third in Thai League 1, arguably showed rather more respect for the Cup and for the home side. There were just three changes from their weekend draw with SCG Muangthong.

Chiang Mai set out to frustrate Chonburi; retaining possession when they could and pressing high to discomfort the visitors. It was effective.

For forty-five minutes Chonburi looked ponderous and increasingly frustrated. Their passing was poor and their decision making was slow.

The first shot in anger was not until the 14th minute when Pinyo on the left corner of the penalty area pinged his shot wide of the far post.

A Kanuk shot and a Songchai header both cleared the Chiang Mai crossbar.

Shortly before half-time Amornthep’s persistence deserved better than his final pass which slid behind Danilo.

And then in first half injury time Watcharin volleyed over the crossbar after Chonburi failed to clear a Meedech/Poomphat throw in and follow-up cross.

0-0 at half time in a game of very few chances but where Chiang Mai had worked hard and acquitted themselves well.

The second half was to be dominated by Chonburi. Playing more direct football and passing the ball forward quickly meant that Chonburi were starting to find and exploit the spaces around the Chiang Mai defense.

Yoo was at the heart of the early action. Shooting over from 20 yards. Being booked for leaving his studs on Veljko and then on the receiving end of a heavy Veljko challenge for which the defender was booked.

A pacey Chonburi move down the left side ended with Kritsada shooting wide.

Kroekit’s wonderfully cushioned first touch allowed him to pass inside for Saharat whose first-time shot from distance was turned away by Jaturong diving to his right.

The arrival of three Chiang Mai substitutes coincided with an aimless spell in the game. Nothing of significance was happening. Patrik Gustavsson made his Chiang Mai debut; he will get more opportunities. Pongrawit was anonymous and looked out of place on the right side of midfield.

Kanuk blasted a twenty yard free kick into a solid Chiang Mai wall. The ball bounced out to Kritsada whose shot was inches wide of Jaturong’s right post.

Yoo’s goal came with just ten minutes remaining. Allowed too much space twenty yards in front of goal his left foot shot was struck with power and accuracy; Jaturong had no chance.

Chonburi might have added a second when Kritsada’s close range shot from a low Chitsanuphong cross was well-saved by Jaturong falling to his right.

There was time for some unlikely handbags between Pongrawit and Renato Kanuk and for Chonburi goalkeeper Chanin to be booked for persistent time-wasting. It was flattering that he thought it necessary as he did not have a save to make in the preceding 90 minutes.

In the end Chonburi came to Chiang Mai, did what they needed to do, and will head home with their name in the last 16 of the League Cup. Chiang Mai can focus on a respectable League 2 finish with a visit from Kasetsart on Saturday 15th.