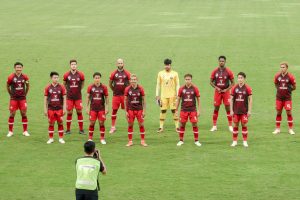 Make no mistake. This game mattered to both teams. Second versus third in the Championship. The winners would have a real claim for one of the two automatic promotion places.

Khon Kaen had sacked their coach two days before this game after a run of three matches that saw a home defeat by Sisaket and two draws. Chiang Mai had to be wary of the new coach bounce.

As it turned out there was only one team likely to win this game. In Evandro Paulista Chiang Mai had the man of the match and the matchwinner. He was, and is, a class apart.

Nont was untroubled throughout; Khon Kaen failing to get one effort on target in the match. They had their half chances but Chiang Mai were dominant and really should have won with greater ease than the scoreline suggests.

Evson started on the right side of defense – perhaps to counter the threat of Conrado, by some distance Khon Kaen’s leading goalscorer but ineffective tonight.

Up front Chiang Mai looked a striker light; Paulista played alongside Thawin but if the wing halves did not press forward there was little width to the attacks.
Early crosses from Thawin and Evson were cleared before Khon Kaen’s best chance of the match.

Evson waited for Nont to come and collect a ball that had bounced from Tewa’s knee forward to the edge of the Chiang Mai penalty area. It really was Evson’s ball to deal with.

In the uncertainty the alert Myanmar forward, Aung Kaung Mann, stole in and had time to turn in the area and get a right foot shot away that was fabulously blocked by Sirisak and then put out for a corner by Surawich.

Thawin overhit a cross from a good position on the right; a stooping header from Boworn was a comfortable save by Chirawat. Thawin’s shot from the left side of the penalty area thumped into the side netting; briefly exciting most of the crowd of 480.

Kitsada was booked for a genuine rugby tackle, albeit a bit high even for rugby, on Thawin as Chiang Mai broke forward. Mann then joined him in the book on advice from the fourth official; the Khon Kaen bench were unhappy.

Boworn’s corner on 44 minutes was flicked on by Thawin at the near post and Paulista was unable to keep his snap shot below the crossbar in the scrum on the six yard line.

Paulista’s run in first half injury time was mesmerizing as he went from the centre circle to wide left and then drifted into the penalty area leaving bodies trailing behind him; but his final ball across the penalty area ran inches behind the stretching Thawin.

0-0 at half time in a game that Chiang Mai had dominated.

Khon Kaen’s three changes at the start of the second half did little to change the flow of the game.

A Paulista cross from the left looked inviting but only Thawin was in the Khon Kaen penalty area.

Thawin’s cross this time from the right, evaded everyone. And there was the issue; if Thawin and Paulista were making runs and delivering the ball from wide who was going to score the goals.

It was time for De Leeuw, who replaced Saharat. De Leeuw is not fully fit but immediately Chiang Mai looked more dangerous.

A Paulista cross was cut out before it reached Boworn.

Boworn’s poor free kick into the wall gave Khon Kaen a chance to break forward. Surawich getting booked as he broke up the attack.

Apisit then climbed all over de Leeuw for another free kick; this time Thawin took his turn to thump the ball into the wall.

Briefly in space on the edge of the Khon Kaen penalty area de Leeuw almost untangled the ball from between his feet as four defenders converged on him.

And then the goal that Chiang Mai so badly needed. Receiving the ball with his back to goal, a defender behind him and by the right corner of the penalty area; Paulista turned, beat three defenders and from 20 yards drove the ball left-footed past the despairing dive of Chirawat. A super goal celebrated in Brazilian style.

A rash of bookings then kept the referee busy; Nattapon was booked for jumping all over Paulista; Boworn and Ronnapee, who was very sound throughout the game, were also booked.

A rare Khon Kaen attack saw Nont push away a cross from the left side; Conrado winning a rare corner. Nont ensuring that the corner was not a threat.

An increasingly frustrated Khon Kaen saw two red cards in the last ten minutes. Panupong’s poor control of a clearance from the keeper allowed Paulista to steal possession. Panupong almost removing Paulista’s shirt as he ran towards the penalty area. A straight red from the referee.

Thawin’s free kick, predictably, was into the wall.

With three forwards bearing down on a single defender de Leeuw’s shot was into the side netting with Paulista and the substitute Jeong both well-placed.

Paulista then released de Leeuw in front of goal; one touch and then a left foot volley that was well-saved by Chirawat.

Into injury time and the second sending off – this time Alongkorn for a launching himself into a scything two footed tackle on, who else, Paulista.

With Nongbua held to a draw at home by Lampang, Chiang Mai move to within three points of the leaders with six games to play. Importantly they are five points ahead of Khon Kaen United in third. Khon Kaen still have to play Nongbua and Phrae in a difficult series of matches.