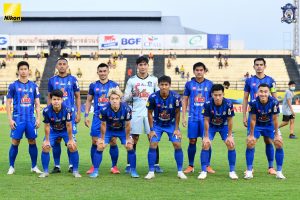 There can be few things worse than an eight or nine hour drive home after a 1-4 away defeat.

Maybe the only thing worse is having to repeat the same thing a week later.

Losing at top of the table Nongbua was not unexpected. The home win against Phrae was a battle but it looked as though Chiang Mai were contending for a play-off position.

But tonight’s visit to Khon Kaen will be as dispiriting for the team as it is for supporters.

It really should be clear to the coaching staff that we are unlikely to score, let alone get points from any game, when neither Ryo nor Bernardo are starting.

A simple statistic – in the nine games played since the February restart, and before tonight’s game, our starting line-up for tonight had scored just once. A Bamba free kick. Out of fourteen goals scored.

Playing football with your hands tied behind your back is problematical.

The team had just one change from the weekend match against Phrae with Suchanon replacing Kongnateechai. One diminutive centre forward for another.

Khon Kaen are on a run of good results but were still in a lowly 13th place in the Championship. They had won three and drawn two of their last five games. But they had also scored only once in each of their last six games. If form was your guide; then they would be difficult to beat but unlikely to score a hatful.

Phommin (who scored at Chiang Mai back on 1 November 2020), Waruth and Peerapat came into the starting XI for Jakkrit, Pedro Dias and Luis Claudio.

Khon Kaen’s early threat came down their right flank where Nawamin exposed Eakkaluk’s lack of pace and his low cross ran just in front of Anupan.

At the other end Apisit on the left side of the Khon Kaen penalty area shot into the side netting, with an unnecessary assist from Narit’s hand.

Seventeen minutes gone and Khon Kaen took the lead. Ratthaphon easily beating Eakkaluk on the right and driving the ball across goal where Seiya made up ground at the far post to launch his diving header past Korraphat. It was a fine finish from Khon Kaen’s leading scorer.

Two minutes later and Narit was hanging on to a Samroeng cross as Nattachai looked to pounce on any loose ball.

On twenty seven minutes Apisit running infield from the left side deftly chipped the ball towards the penalty spot where Suchanon had run between Anupon and Yuki Nohara and then cleverly lobbed his header over Narit who was caught in goalkeeping no-mans land. 1-1.

The game meandered towards half time; a Bamba ball forward into the penalty area hit Nattaphoom on his back; it rather summed up the first half; although on the stroke of half-time Nattachai did have a half chance with a near post header from Apisit’s cross.

1-1 at half time and time, surely, for Chiang Mai to make changes and take control.

Ten minutes into the second half and Meedech played a lovely ball forward for Nattachai on the right wing. He had time to measure up his cross and placed an inviting ball into the area where Bernardo headed over from ten yards. A costly miss.

Ryo came on from Chutipan with Tassanapong moving to the centre of the back three.

For 62 minutes Chiang Mai were in an evenly contested game of few chances.

But then Seiya wins a free kick just inside the Chiang Mai half. The ball is lobbed forward to the right side of the penalty area. Nohara outjumps Meedech and heads across goal where Seiya has run between Bamba and Tassanapong to head home with authority.

Three minutes later it is 3-1. Meedech is adjudged to have fouled Seiya 25 yards from goal. Chiang Mai half clear the free kick which reaches Waruth (once of Chiang Mai) 22 yards from goal. His shot is struck hard and low. It clips the half-hearted foot stuck out by Tassanapong and deflects low beyond Korraphat’s left hand.

As Chiang Mai press forward Meedech drove a shot wide; Porncha replaced Nattachai; Narupon replaced Suchanon. Chiang Mai were enjoying plenty of possession without really threatening to get back into the match

A Bamba free kick reached Eakkaluk at the far post. Clever feet from the Chiang Mai captain created space but his shot was blocked by Ratthaphon.

Meedech and Seiya were booked as they disputed how quickly Chiang Mai could take a free kick. Meedech may still be shaking his head at the injustice of it all.

A foul on Pinyo set up Apisit for a 20 yard free kick. His effort bouncing just in front of Narit who could do no better than shovel the ball to the side, away from the Chiang Mai strikers.

Apisit’s quick free kick on the left side half way line released Ryo; we have seen this so often; he is on the left side of the penalty area; cuts inside; finds enough space to curl his right foot shot with power; but this time onto the cross bar with Narit beaten.

Then the final flourish from Khon Kaen; Narit’s long clearance is headed on for Phongpat; who spreads the ball wide to Somprasong on the right side and continues his run. Phongpat’s cross is low and hard and neatly finished by Somprasong with the outside of his left foot gliding the ball past Korraphat for 4-1.

Chiang Mai fall to sixth after their third defeat in the last five games. It is not the form of a side that wants a play-off place. Chainat, unbeaten in their last five games are a point behind.

Ranong have also won four of their last five games and are now pushing for a play-off spot. Credit where due to the three promoted teams from last year’s League 3 who are all in with a chance of a play-off spot.

There are six teams competing for three remaining play off spots. At least it keeps the last six matches interesting!